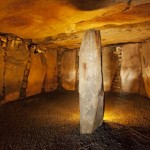 The evidence for human activity on the island dates from around 7000 BC. Hunting tribes established flint workings on Lihou Island and as time went on and travellers stopped off to replenish their supplies in Guernsey’s safe anchorage many of them left behind pottery, tools and weapons. Others remained as settlers, bringing elements of their cultures to the Island. The legacy of these early settlers remains today, with structures such as the Dehus Dolmen and Menhirs (standing stones).

Later archaeological finds suggest that thriving communities developed as trade routes grew. Objects found with the skeleton of an Iron Age Warrior for example, bear witness to their success. There was probably little resistance to the Roman invasion in around 150 BC; business around the harbour flourished as trade routes within the Roman Empire expanded. Islanders in St Peter Port spoke Latin, worshipped Roman gods and generally made the most of the opportunities with waterfront warehouses and smelting works even producing counterfeit coins. 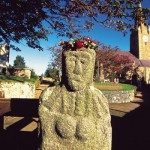 After the collapse of the Roman Empire the Island seems to have settled back into a more mundane way of life, no doubt catering for the needs of British settlers migrating south to Armorica – or Brittany as it became known. Christianity was probably introduced to the Island in about 400 AD but it was not until around 525 AD that St. Sampson arrived to establish a more secure footing for the church.

In 933 The Channel Islands became part of the Duchy of Normandy and by 1028 Guernsey had been divided into two large estates called fiefs held by two Norman Seigneurs (Lords). The invasion of England by Duke William of Normandy in 1066 brought Guernsey closer to England, though its laws and language continued to follow that of the Normans who had originally been Vikings or ‘Northmen’. By the reign of King Henry II of England (1154 – 1189) Guernsey had become part of a realm that eventually stretched from the North of England to South Western France. By this time Benedictine monks had set up a priory in the Vale, and later on Lihou Island and the consecration of a number of churches during the 12th century established the 10 parishes of the Island.